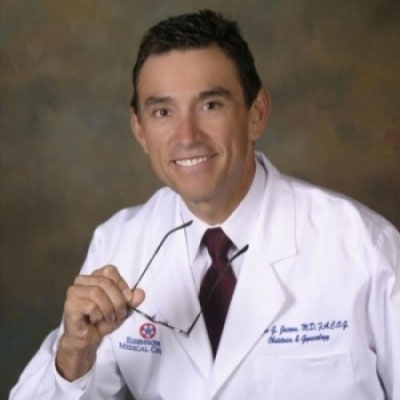 Board certified by the American College of Obstetrics and Gynecology, Dr. Enrique G. Jacome completed his residency at Harbor-UCLA Medical Center.

His research “ Comparative Analysis of Vaginal vs. Robotic Assisted Hysterectomy for Benign was published in the Journal of Robotic Surgery. “The posterior Approach to a Robotic Hysterectomy” his video is now featured at the International Academy of Pelvic Surgery.

He is the Current Section Chief of Gynecology at Eisenhower Medical Center in Rancho Mirage, CA. As a leading advocate of Bio-identical Hormone Therapy he has improved the quality of life of thousands of women using hormonal implants.

Dr. Jacome and his wife Karla feel very strongly about living a healthy life. Their son Lucca is a fun, bright and energetic runner, with an artistic and a competitive side.

END_OF_DOCUMENT_TOKEN_TO_BE_REPLACED

Dr. Enrique Jacome has been honored for excellence as a Castle Connolly Top Doctor.

Castle Connolly Top Doctors® are selected by Castle Connolly Medical Ltd. after being nominated by peer physicians in an online nomination process. Nominations are open to all board certified MDs and DOs and each year tens of thousands of doctors cast many tens of thousands of nominations. Honorees are selected from the nominees by the Castle Connolly physician-led research team based on criteria including their medical education, training, hospital appointments, disciplinary histories and more.